What is Santa Claus is he real?
To many people Santa is the Christmas figure or fantasy we tell our children.
He’s a guy who dresses up as a gift giver sits for us to have a photo with, goes Ho Ho Ho and a symbol of Christmas (like the Christmas tree).
Some adults don’t like to see him too early as it can be a reminder that this guy costs us money and his impending arrival can severally stress our lives both for time and money.
For others he is welcome all year as he invokes that feeling of the Christmas spirit and giving.
For some, Santa is not the reason for the season and is a competitor to their faith, which is sad as Santa is really a reinforcement of much we hold as good in our society.
Santa Claus as we know of him today is from a real person. A Bishop who became the patron Saint of Children and Sailors. But as we see Santa today he stands as our children’s first basic contract with society.
It’s based on the if your good, acting within the rules of society then your rewarded with nice things. If your not you don’t get nice things, (coal?) remember this comes from the northern hemisphere where it’s cold at winter so a lump of coal could keep you alive for a little while, so punishment maybe? but also a reminder to keep trying.
If your familiar with your Christmas movies like The Miracle on 34th Street, the 1994 version with Richard Attenborough as Santa, there is a point when he tells this to the mother of Susan.
“I’m not just a whimsical figure who wears a charming suit and displays a jolly demeanour.”
“I’m a symbol of the human ability to be able to suppress the selfish and hateful tendencies that rule the major part of our lives”
“if you can’t believe, if you can’t accept anything on faith then your doomed to a life dominated by doubt”
It seems that nowadays there is more Santa Clown than Santa Claus tho. The boot toppers bad costume fake beards it’s very hard to have a child’s fantasy stay alive and not turn into cynicism about “just another fake Santa’s helper”.
Reinforcing the belief with realism? that takes work and dedication…… and you don’t know he may still be real?
We have not set out on this journey to make just another Santa experience, we have set out to make THE Santa experience and we hope you enjoy your journey with us and the Christmas miracles in your family discovering Santa. 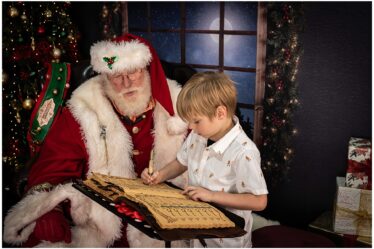