This is a beautiful passage from a film director who made a documentary about Santa’s in the United Sates. I always feel that it’s a must read for parents as i have never read or heard a better description of how sad it is that belief in Santa is taken away because of all they se not being real.

“There are few things as rare and mysterious as the world of a child.

Their world is rare because of the short time it lives.

The mystery exists because while they are experiencing it they don’t yet poses the language to communicate it to adults, by the time they do the world is long gone.

This inner world populated by unseen friends, Fairies, Elves and Monsters appears to be a natural state for the very young but through adult indoctrination laughter and derision this world eventually evaporates and suddenly they are thrown into the adults world where nothing is real if it can’t be it can be seen touched or explained”

“I remember the child’s world, it’s a dim memory, more like remembering a dream but I do remember. I remember mourning the loss of my beliefs as they were stolen away one by one.

The magical beings, the invisible companions, each one taken away when the adults said I was to old to believe anymore. Like most children I was allowed one exception at least for a few years, and then they took Santa Claus away, the world would never be the same”.

Bringing your children to visit with Santa and Mrs Claus is an endorsement of their belief in Santa and the wonder of Christmas, and isn’t it nice to keep that alive as long as we can.

Do I believe in Santa Claus? yes I do, although he doesn’t bring me presents anymore he gives me so many more gifts every year. 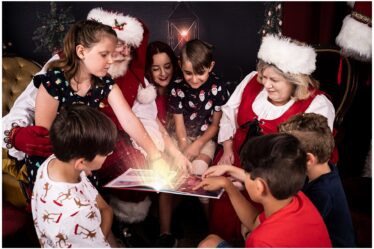